Great Tasting ENU Ready to Drink Shakes deliver complete nutrition for a wide range of daily medical and dietary needs. ENU Shakes may be enjoyed by drinking or used as a tube feeding formula.

ENU Pro3+ is a unique, soluble, and flavorless, nutritional additive that is clinically proven to increase daily protein and calorie consumption. It can be conveniently added to your favorite foods and beverages without altering taste, texture, or increasing food intake volume.

Get a FREE
ENU Intro Pack* 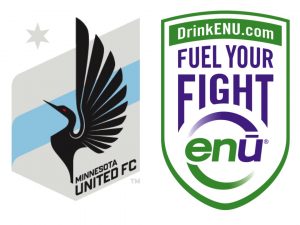 Developed in collaboration with doctors and dietitians, ENU is a great tasting complete meal replacement shake that is gluten and lactose free. With 25g of protein, nearly 500 calories per bottle, and no added sugar, ENU is the best choice for extra calories and protein because it uses only quality non-GMO ingredients, such as whey protein isolate, quinoa, and coconut oil.

This unique nutritional profile makes ENU an ideal source of nutrition for athletes with heightened calorie requirements due to rigorous training regimens, such as Minnesota United players.

As part of the agreement, Minnesota United players will have access to ENU shakes to support their nutrition needs after games and training sessions. ENU will also sponsor the “Man of the Match” MVP award following every game of the 2015 season.

Yoshi Ono, Head Athletic Trainer for Minnesota United, commented, “The quality ingredients and level of nutrition is what separated ENU from other products that we have evaluated. We are thrilled to have ENU be a major part of the nutritional program for our players.”

Will Brown, CEO of Trovita Health Science noted, “When soccer is played at an elite level, the added intensity means that players burn off significantly more calories during training and games. The result is a need for excellent sources of nutrition for sustained energy and the right levels of protein for muscle health – and that is what they receive with ENU. Our team at Trovita Health Science is thrilled to partner with our hometown Minnesota United, and provide their talented players with the best nutritional shake available today.”

Trovita Health Science is an emerging specialty health and nutrition company, dedicated to developing and commercializing products that address unmet needs in clinical and sports nutrition. Trovita is recognized for innovation in the adult and sports nutrition categories, and was named a Division Winner in the 2014 Minnesota Cup, while ENU was also selected as the 2014 CPG Editor’s Choice Award Winner for the best new innovation in weight management products. ENU is certified by Informed-Choice and has been verified through laboratory testing as being free of all banned substances. ENU is trusted for use in sport.

Compare ENU Shakes vs. Other Shakes

ENU Pro 3+ is a flavorless powdered energy supplement that is packed with protein, healthy fats, carbohydrates, and leucine to promote muscle synthesis and lean body mass. It is simple to use and is completely water-soluble and mixes easily in liquids and moist foods. Adding ENU Pro3+ allows you to easily add extra calories, protein and leucine into your normal, everyday meals.

Ingredients and Instructions for Use

Use under medical supervision. Amount per day to be determined by medical professional and is dependent on age, body weight, and medical condition of the patient. Not for parenteral use.

ENU Pro3+ is soluble in liquids and moist foods with minimal effect on taste, texture, and volume. For enteral or oral use.

Measure ENU Pro3+ using the included scoop. A level scoop holds approximately 8.6g of powder. Add powder to the desired volume of liquid and/or moist foods and stir continuously or use the aid of a blender until the powder has dissolved. Once mixed with liquids or foods, keep refrigerated and consume within 12 hours.

Store at room temperature. Avoid excessive heat. Do not freeze. After opening canister, consume contents within 30 days. For expiration date, check the bottom of canister.

Unlike other energy supplements, ENU Pro3+ powder is about more than just calories. Our unique blend of macronutrients delivers fats, carbs, and lean protein with every scoop, providing quick and easy nourishment to those who need it. In addition, each serving of Pro3+ contains fiber and more than 20 vitamins and minerals to support the body’s systems.

By incorporating ENU Pro3+ into your daily routine, you can more easily hit your calorie goals, helping you to maintain or increase your weight without having to drastically alter your diet. Because our formula has been enriched with leucine, an essential amino acid, Pro3+ also promotes the synthesis of new muscle tissue – a key part of healthy weight gain.

Pro3+ is free of sucrose, gluten, or isoflavones, so it’s great for those with special diets or certain food sensitivities. Simply add our flavorless, water-soluble mix to any liquid or moist food for a boost of nutrients and energy with little to no effect on taste or texture. Whether you’re after extra calories, more protein, or better all-around nutrition, ENU Pro3+ can help.

×
Why Choose to Autoship?